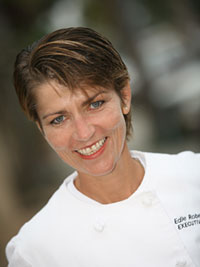 Known in Santa Barbara for the ten years she spent as former Executive chef/co-owner of the Sojourner Café, Edie Robertson is a multi-talented woman whose petite frame conceals remarkable amounts of energy, talent, and kindness.

The impish Robertson achieved fame early: a world skateboarding champion while still in her teens, she was also the lead singer of She-Rock, an all female rock band that was the first American rock band to be allowed to perform and record on mainland China.

After graduating in 1996 from Western Culinary Institute/Cordon Bleu in Portland Oregon as Valedictorian with top honors, she completed her education with an internship at Aqua Restaurant in San Francisco under celebrity Chef Micheal Mina.  Chef Edie returned to Santa Barbara in 1997 and became Executive Chef and co-owner of the Sojourner Café until August of 2008.

Her commitment to sustainable practices made her one of the first chefs to actively support local farmers, taking the time to peruse the aisles of the farmers market, her red wagon in tow, in search of the freshest organic produce, choosing to spend extra time and money to obtain organic ingredients for the restaurant’s kitchen, and becoming the first partner restaurant in the City of Santa Barbara’s pilot composting program.

Edie has a huge heart. Her charitable endeavors include serving as vice president on the Board of Directors of the Community Kitchen, feeding the homeless at Casa Esperanza, and participation in charity fundraisers too numerous to list.

An athlete dedicated to living a healthy lifestyle, Edie runs and rides with the Eschelon bike club, and she is a lead singer/guitarist for Jayne Wayne, a local rock band.